Deputy Prime Minister and Foreign Minister, Pham Binh Minh, and Minister of the Interior of Lithuania, Eimutis Misiunas, signed an agreement on visa exemptions for diplomatic passport holders from the two countries at a ceremony on January 23. 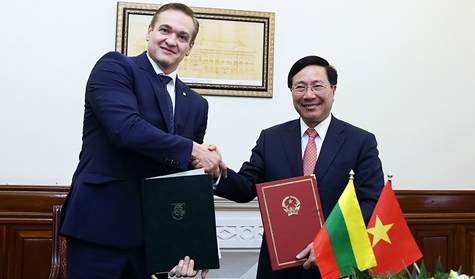 Vietnam also grants visa exemptions for flight crew members of 18 countries and territories on the principle of reciprocity.

In addition, Vietnam has unilaterally exempted visas for citizens of 13 countries, including Russia, Japan, the Republic of Korea, Norway, Finland, Denmark, Sweden, the UK, France, Germany, Spain, Italy, and Belarus, as well as to ASEAN Secretariat officials, in a bid to attract more international tourists.

At the ceremony, Deputy PM Pham Binh Minh and Minister Eimutis Misiunas also signed an agreement to resume the reception of citizens between the two countries.

Earlier in the meeting with the Lithuanian Interior Minister, Deputy PM Pham Binh Minh welcomed the Minister’s first visit to Vietnam, while valuing the results of the talks between Minister Eimutis Misiunas and Vietnamese Minister of Public Security To Lam, particularly in the field of crime prevention.

Minister Eimutis Misiunas expressed his pleasure at the positive development of the bilateral relationship based on mutual understanding and wished for more fruitful relations in the future.

The guest affirmed that Lithuania supports Vietnam to further strengthen its cooperation with the EU, especially in the fields of economics and trade.
Source dantri.com

Please ensure if you need a visa for Vietnam or not.

We would be very happy to help you! Our team advisor are 24/7 at your service to help you.

Why book with us?